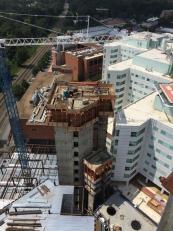 Take a look at this TIME-LAPSE VIDEO of the hydraulic self-climber performing lift #6 of 15 on Core A-B, which encompasses 3 elevator cores and 1 stair core. The 30 second clip captures the 14' lift over approximately 30 minutes (real-time).