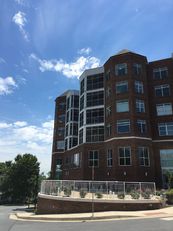 Westminster Canterbury is an 8,000 cubic yard, 110,000 square foot addition to the existing retirement facility. The project began with two levels of cast-in-place parking with a cast-in-place pool at the upper of the two levels. The next two floors were comprised of structural steel with slabs on metal deck, and the remaining floors were constructed with Infinity pre-engineered metal wall panels supporting Epicore composite deck infilled with concrete, all of which Century installed. Concrete core shear walls for the elevator and stair shafts extended through all levels of the building. Along one side of the building, Century placed 30-foot tall, one-sided walls against lagging. Prior to construction, Century erected a tower crane that was used for construction of all elements of the building for the duration of the project. The building was constructed to connect the existing building, and was located within 20 feet of occupied, residential cottages. Therefore, coordination among the General Contractor, Subcontractors, Owner and residential community was essential on this project.