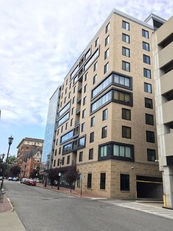 The Square at Shafer and Grace Streets in Downtown Richmond is a 171,000 square foot, 12-story structure, home to both housing and retail space at the center of VCU's campus. Construction began below street level with parking areas for the building above. The entire project site was excavated with lagging installed around the perimeter for stability. Prior to starting foundations, Century erected a tower crane that was utilized the duration of the project. The first two levels of the structure were entirely cast-in-place, including full perimeter walls up to the ground level. For the remaining 11 stories, Century partnered with Infinity Structures to install the specified Epicore MSR composite deck system, consisting of pre-panelized, load-bearing, metal stud walls and metal decking with concrete fill, all of which Century installed. Additionally, the project included cast-in-place core walls, which Century installed using a hydraulic, climbing wall form system, allowing the walls to pour prior to the surrounding floors. Century delivered the project on schedule while confined to limited space in the downtown, urban environment, which presented a unique challenge to this project.